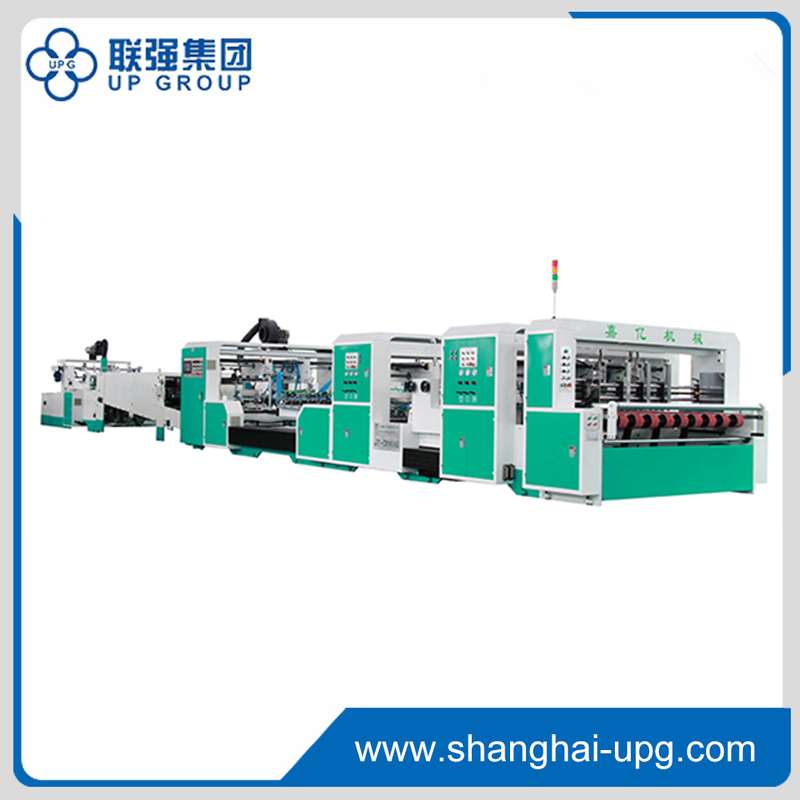 LQ-series automatic folder gluer is not only suitable for flexo carton glue forming, but also fully meets the demand of offset printing glazing and coated carton glue. A standard machine is made up of such six parts as the feeder section, the preprocessing folding section, the folding section, the full pressing section, the pressure enabling dry section and the counter and convey section. According to the different needs of customers, this can be used for the straight line box, the crash-lock box, the four/six corner box and other complex shapes of the surface of carton glue function, achieving multi-usage. With PLC control and spilt-box drive, it is endowed with stable operation and low noise, The pre-folding section is equipped with spraying humidification and a secondary line pressing device that can effectively solve the size seam in the process of tapping. Speed of the formation belt and the clappers can be regulated independently, effectively reducing formation of the scissors gap in the gluing process.
This machine is furnished with operating convenience and steady running, which make it a preference for reducing work force in the back-end processing and improving efficiency by the paper-makers.

Feeder Section:
● The pasteboard transportation relies on seven paper feed belts of 100mm width, spacing of the feeding belt is adjusted by the tension to be suitable for cardboard with different widths, and the power is supplied from the grain roller．
● The feeder section is equipped with baffles on the left and the right sides, which can be adjusted manually based on different cardboard width with pneumatic jogging device installed on the left．
● Two feeding knives are equipped at the front end of the feeder section, which can be adjusted up and down based on different thickness of the cardboard.
● Step-less speed regulator ensures convenient and quick operation and steady paper feeding.

Preprocessing Folding Section:
● The spraying and humidifying equipment is installed at the front-end of the pre-processing folding section, humidifying the cardboard according to its dry-wet degree. The photoelectric eye controls the humidifying time, which will automatically spray and humidify the folding process when sensing it, thus guaranteeing the folding line of cardboard in molding not to burst even when the machine runs at a high speed to achieve ideal formation effect and orderly, accurate and appealing carton gluing.
● Two groups of pressing wheels, one group of rubber thread ones and the other group of steel wire ones, pre-press the sprayed and humidified cardboard. The rubber thread ones can avoid the folding line bursting under high speed while the deep pressing line can be adjusted by swinging the turbine and the worm manually.

Folding Section:
● According to different cartons and paper boxes，one or more gumming devices are set at the front-end of the final folding section, of which the glue spreader is composed of the lower gluing wheel, the upper pinch wheel and the glue case. Computer controlled glue spray system can be equipped based on customers' needs.
● The folding of 180 degrees between the second folding line and the fourth folding line on the left and the right sides of the cardboard is mainly achieved through three 40mm wide bottom belts and two 60mm wide turning belts. Speed of the formation turning belt can be independently to control size of the scissors gap.
● Many idler pulleys at different angles are set in the left and right sides，positions and angles of which can be adjusted according to different paper characteristics and the thickness of cardboard to make folding more smoothly.
● Many axial bearings under the bottom belt are installed to support and guide the smooth operation of the belt.

Full Pressing Section:
● According to different widths of the formed carton，the spacing between the left pressing zone and the right pressing zone could be automatically regulated by inputting parameters on PLC touch screen．
● The paper feed speed should be adjusted according to the whole speed to make the formed cartons enter the full pressing assembly in superposition．
● The upper and lower conveyor belts' clearance（pressure） should be adjusted according to the shapes and the paper characteristics of the formed cartons to transfer the carton to the pressing and creasing section orderly and to make the carton bond more perfectly．
● Togging device is set at the tail, which corrects the gluing position of the carton through the forth-and-back movement of the camshaft gear to ensure bonding precision.
● The master control cabinet of the machine is fit on the full pressing assembly, convenient to inspect and operate the whole line.

Counter and Convey Section:
● The humanized slope-type conveyor structure is convenient for operation to alleviate the labor intensity．
● Two ejecting reamers are set，which can electrically adjusted back-and-forth based on shape and length of the formed carton．
● A set of pinch wheels are set, which can press uniformly, buffer the impact force to avoid abnormal paper ejection．
● Stack and ejection quantity can be set ejected orderly based on customers&rsquo; needs．
● Pneumatic front retainer and reciprocating push rod are used for more accurate and rapid paper ejection.